So, you have a depressed or agitated cat and a friend suggest trying catnip. Many cat owners occasionally treat their pets with catnip, also called catmint or catwort as a way to liven up their mood and calm them down. But is this just some passing trend or does it have any real effects?

Although to us catmint is nothing more than a sweet-smelling herb, it’s long been known that the plant can trigger feelings of euphoria in felines. This aromatic herb contains a chemical called nepetalactone which mimics pheromones responsible for happiness in felines. Just a whiff of cat nip can have cats rolling around, jumping excitedly and drooling like they’ve been smoking some kind of psychoactive substance. As a result, catnip can be an effective way to encourage lazy and overweight cats to run around and be more active instead of just lying around. 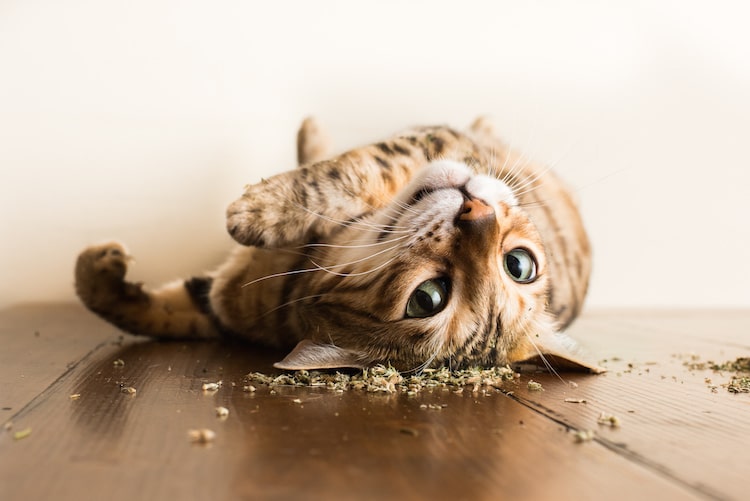 But after the initial euphoria caused by the plant dies down after 15 minutes to half an hour, the cat will stay in a calm state for quite some time. So, if cats normally hate grooming, a kitty under the influence of the plant will stay calm and won’t fight you when you’re giving it a bath or trim its nails. In addition to this, you can use catmint as a sedative to reduce anxiety when moving to a new location or when another pet is added to the family.

However, it’s important to note that not all cats will react to the plant. Sensitivity to catmint is passed down genetically, and only about 80% of cats carry this gene. What’s more, older cats and kitties younger than six months aren’t usually affected by the stuff. You can purchase cat nip from a pet store in dried form or as a spray and see whether you’re cat will react to it. If it has a positive effect, you can try to rub some of it on your cat’s scratching post or sandbox to encourage use or spray it on toys to promote play. While spray catmint is not as powerful as the dried form, it’s not as messy which makes it a less messy choice for your home.

Although catmint has strong effects on feline behaviour, it’s proven to be safe for use and non-addictive. However, it’s recommended to use it in moderation because overexposure to the herb diminishes its effect in the future. For that reason, it’s best to offer this treat occasionally – a couple of times a week at most.