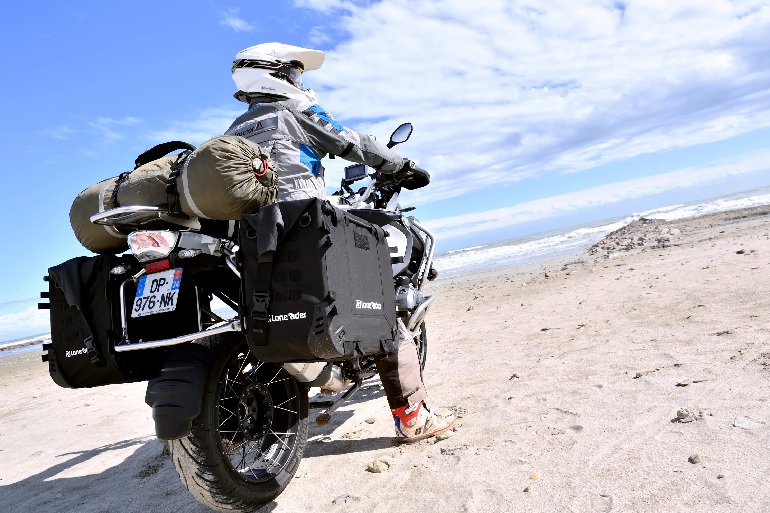 Long travels on a two-wheeler can seem like a tough task, but if you know how to organize not just your trip, but also the items you plan to bring with you, it can turn out to be quite an adventure. Although canvas and leather bags used to be predominant, nowadays you have a multitude of options with hardshell luggage becoming more available. This is mainly because hard luggage provides better protection from the elements and sticky hands, but both soft and hard luggage have their advantages and come in the form of a variety of products.

Soft luggage is considered to be the easiest to mount and remove, which is why a lot of riders who travel for days opt for canvas bags. While soft motorcycle luggage is water-resistant most of the time, but not waterproof, there are still some soft inner waterproof bags. Soft luggage bags can’t be locked to prevent theft, but they are a lightweight option which won’t get in the way as much.

Hard luggage is generally a better option and while that’s true in some regards in others it isn’t. A hard luggage tank, for example, won’t make it easy for you when you need to mount it on your bike. While it can provide better protection for your belongings, you’ll need to unscrew it from the mount every time. The hard luggage products are waterproof and make for a barrier between the pavement and your legs which makes things a bit safer in case of an accident. 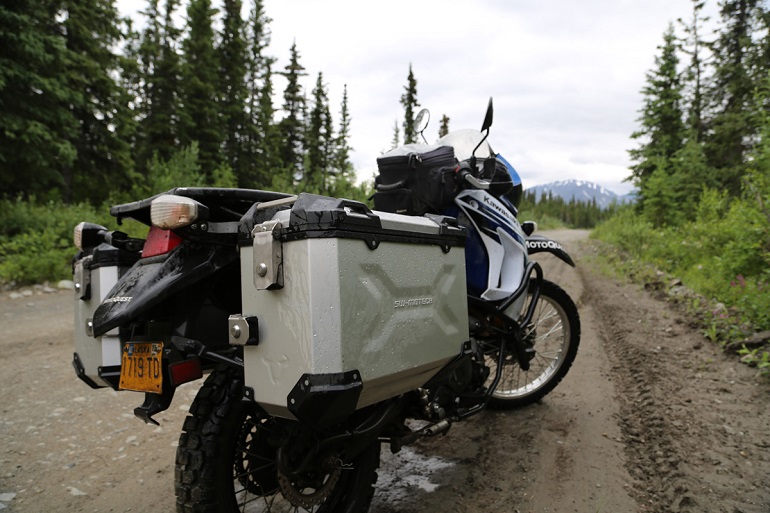 This is a tougher version of the saddlebag, which we’ll talk about in a bit. Although side cases are basically hardshell cases, they are not obtrusive since they sit attached behind the rider. Although they require a mounting bracket, they usually come with a quick release so it’s easy to take them on and off. They are highly unlikely to twist and bulge in the wind and if placed down low, they won’t affect your centre of gravity as much.

Saddlebags have been around longer than the motorcycle and because of that, they are still a very popular option and today they come available in two other materials than just leather. Cordura nylon  and synthetic leather , which are maintenance-free materials, also offer great weather resistance. Whilst being easy to mount and take on and off between rides, saddlebags are also unobtrusive, fairly inexpensive and can be easily filled with oddly shaped objects. A semi-rigid bag is also referred to as a saddlebag.

With these two types of motorcycle luggage, you get a similar experience with the sissy bar bags being sat up straight at the back, while tail bags are strapped on the tail. Sissy bags can also be strapped on the rear fender, luggage rack and frame. These bags are easy to take off and put on as the installation usually involves buckles and velcro patches they are also unobtrusive and easy to access since they usually sit up high. 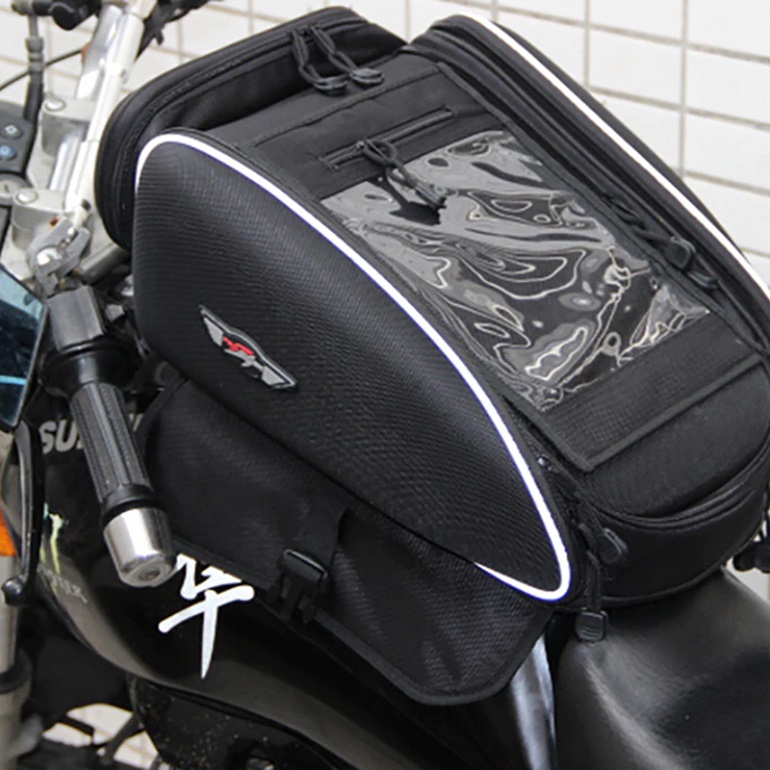 Although quite handy as a daypack, tank bags are not going to be the best choice when you want to store a whole bunch of stuff. Their capacity is meant to accommodate only essential items and since they sit on top of the fuel tank, they make for an easily accessible storage point. As long as your bike has a uniform metal tank, these bags should be secured with magnetic flaps, otherwise you’ll need to rely on good old strap systems. While they cannot be locked shut and can be quite obtrusive, tank bags are actually well-balanced meaning that they won’t affect your handling.

A tail bag also has its hardshell version which is called a top case and can be mounted on the passenger seat or extend behind it. Like any other hard motorcycle luggage, top cases are durable and waterproof, but also easy to take off and put on. They sit up high which makes them easy to access, however this can have a negative effect on the centre of gravity.

Last but not least, there are fork and handlebar bags which are also small, but unlike the previous two, these come in a tubular shape in order to match the shape of the bike’s fork or handlebars. Again, these bags are soft motorcycle luggage which is easy to take off and put on, fairly inexpensive but also easy to steal whilst being very versatile as you can position them on different locations on the bike.